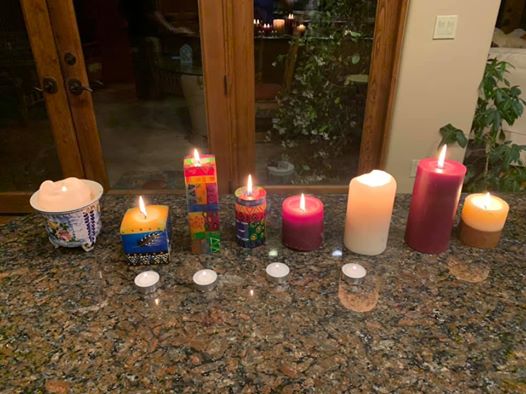 My life has been deeply marked by war. Scarred and also touched in tender ways.

It began before I was born, when my Grandpere, a Colonel in the Army, commanded an infantry unit in World War I. I have read a diary he kept, knowing the writing merely scratches the surface. Grandpere gave witness to the fact that warriors can be tender—and who knows? Maybe that reassured his daughter–my mother– when she fell in love with Bob Hale, who would enlist in the Air Corps in 1940 and become a flight instructor.

I came along in 1943, and 15 months later my father was called overseas. First stationed in England, he would move with the front to France, become operations officer for his squadron, and pilot missions in his B-26, The “Sack Queen,” over Germany.

In February of 1945, when the war was all but over, Captain Hale chose to take a dangerous mission away from an airman who had just arrived. Near Aachen, Germany, his group was attacked and his plane was shot down. He managed to keep flying while the crew got out, except for his bombardier who was trapped in the seat underneath the pilot’s. Floating toward the earth, one of the crew counted the other chutes and watched my father crash. Captured on the ground and injured, the survivor would write to my mother who was waiting for good news for months. Finally my father’s death was confirmed.

Part of what I’m honoring today is not only the courage my father and his crew showed, and not only the courage my grandfather showed, but the courage required by the survivors. My mother had already suffered two breakdowns before my father’s death, and the fall from their joint life that had looked so romantic and promising must have been horrific. Mother moved home to her parents with me, and so I was raised by a small village. When I was four my Grandpere died, and so the women struggled on together. Hasn’t that always been the way in the wake of war?

I grew up treating my father’s death as a given, like the shape of my nose or being female. And I was happy to have a new Daddy and a baby brother when Mom remarried. It took until well into adulthood for me to admit the enormity of my loss, and of course, my mother’s. Her descent into addiction and mental illness may not have been caused by her loss, but it certainly didn’t help. And the denial I used to survive became the seed for problems I would cause myself, and also for the eventual growth that would be a healing force.

Small wonder that I first fell in love with a man who had also lost a father early. He would become a father and I a mother, sharing both love and also the shadows of our early wounds. The marriage would eventually fail. The inner divisions and warfare, internalized versions of collective combat, consumed the relationship.

And then I fell in love with a warrior. Jon Trachta, a Viet Nam vet, fighter pilot, recipient of a Distinguished Flying Cross and other medals, who flew over 230 missions. And over 30 years of marriage I’ve heard not only hilarious, harrowing and thrilling stories to make me proud. I’ve also been witness to nightmares. To the fact you don’t approach Jon and touch his back if he hasn’t seen you coming. He likes to sit in a restaurant facing out so he can see who’s there. He is a warrior-turned-skilled-mediator who has also taken the time and had the courage to mediate his own inner wars. I honor not only his service, but the courage he has shown navigating the world since.

How will we evolve past war? Not by figuring out strategies. Not by developing better weapons. Not by anything the mind can conjure. No, this will require a change of heart. Wise voices from ancestors and spiritual leaders present today are in agreement. The only answer is love.

How to begin practicing love? At our little ceremony, I’ll offer my broken heart. That  my handsome, brilliant father had to die at 27. That my beautiful, tragic mother had to suffer. That my grandmothers and aunts and uncles were all scarred by war. That promising classmates never lived a full life. That the men running the country still regard war as a viable strategy and think winning wars actually gets us somewhere. I’ll offer that brokenness, and offer the love I have for my grandchildren and my willingness to stand for peace.

I’ll try to do more than pray. But if we begin with humility and with our loving grief, and ask to be shown ways to be of service, I believe those ways will appear. And when they do, if I’m able to stand, I’ll step in.

May you experience your own stories of love and peace this Memorial Day. Let’s use it to remember who we truly are, and that we are capable of transformation.