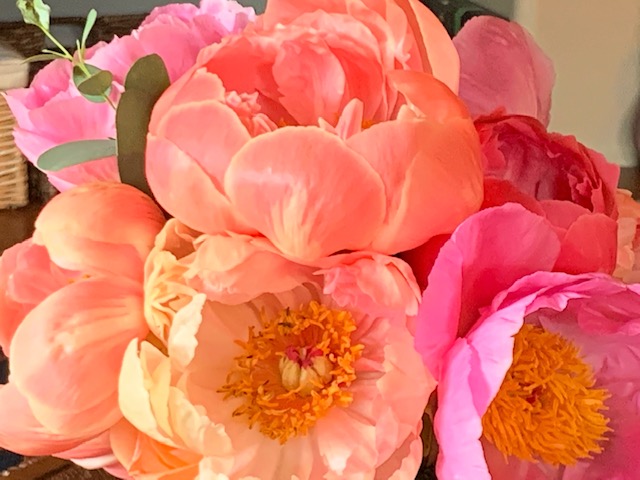 Before I came to this life,
I was shown this world
from the distant shores of it—
and in that moment I saw
the full arc of my days here,
the exquisite range
of this embodied dreaming.
Oh how beautiful, I cried.
Oh how terrible.
Oh—this terrible beauty.

And the angel who guided me
simply pointed to the shimmering
horizon and said—Yes.

excerpt from Luminous, by Laura Weaver

The news yesterday was the definition of terrible beauty. The horror of senseless murder, repeated oppression by a brother on a brother–Cain and Abel all over again. And then, out of the beautiful passion that rises from the people, the gorgeous outrage, comes violence that breeds more destruction. Are we doomed to keep living out such paradox, such dark and light?

On the same day as the violent protests, two astronauts were thrust into space, where they had a view back at our fragile jewel of earth. I wonder if like Edgar Mitchell , the astronauts had an aha moment. Did they see from that great distance the senseless pattern we keep repeating? Did they shake their helmeted heads and wonder who the strange inhabitants of that planet are and when we’re going to stop hurting, oppressing and killing each other?

Did they wonder, as I did, what it will take? You’d think we might have seen where violence gets us after the Civil War, where at least 618,000 Americans died. Or maybe it took World War I, which took an estimated 15-22 million lives and left 23 million wounded. But, we went through World War II, which resulted in 60 million deaths, including 6.9 million murders of Jews by the Nazis. Closer to our memories is the Vietnam War. Estimates of the total casualties vary widely, but 1,353,000 total deaths seems to be the latest number.

The numbers are so numbing and overwhelming that they have failed to change our behavior. It’s hard not to respond to violence, oppression and genocide with anything else but violence; we think of it as the currency of power. And yet we have learned that violence breeds more violence. What will it take to emerge from this predicament?

It has become a cliche that the Chinese character for crisis also means opportunity. How could this dark time in our country and also in the world be a portal for the Great Shift that prophets have long prophesied?

Back to the spacecraft, named Dragon. I find it interesting that the dragon is one of the most ancient and potent spirit guides. “The never-ending battles between knights and dragons reflect the inner struggle of human kind to come to terms with the spiritual or ethereal nature.’

In the East, The Dragon is about the Emperor, who in ancient times was the designated dreamer for the country. And in Peruvian and Ecuadorian shamanism, the dreamer is the change maker; if you want a different world, dream a different dream.

And what about the juxtaposition of the Corona virus, right up next to a story of tragic oppression, justifiable outrage and a violent response? It seems we are getting a message screaming at us through loud speakers. Here’s a response to COVID from Arkan Lushwala,Peruvian Indigenous ceremonialist and healer:

“In a deep, primordial part of ourselves, many of us have been waiting for something like this to happen. Someone or something powerful and sacred had to intervene in order to stop the destruction of the sources of life. The Earth herself has now done so. Viruses are made by the Earth. And now as humanity, we are forced to make the sacrifice we couldn’t make from our own will.
With deep compassion for those who are suffering, I have to say that the Earth is still being kind and gentle, that her way of defending herself could be much worse.”

And in a brilliant Essay, The Coronation, Charles Eisenstein writes: “As Covid stirs our compassion, more and more of us realize that we don’t want to go back to a normal so sorely lacking it. We have the opportunity now to forge a new, more compassionate normal.”

Eisenstein’s title points out the irony that ‘corona” means “crown.” Is this terrible crisis also a beautiful opportunity for us to put on a crown? To assume that leadership that the dragon also invites? Can we dream a new dream? Can we live it out this time?

This kind of leadership is not forthcoming from the White House, where we are getting the same old messages we heard when the Roman Empire was falling. The leadership evidently has to come from all of us, who are not separate after all, but bonded by and with the web of life. We are all here at this time for a reason, and here it is. This is a portal. Can we open our hearts and live from that place?

In the Pascua Yaqui Easter ceremonies, a great drama is enacted. Fariseos—soldiers representing the Pharasees—capture an effigy of Christ and seize control of the church. The defenders of the church arm themselves with flowers. The Fariseos retreat, and then advance toward the church three times. Each time they are repelled by the Pascolas or Deer Dancers and the defenders, who throw flowers at them. The third time they surrender, taking off their ceremonial masks, which are then burned in a huge fire, accompanied by a celebration of the resurrection.

How could we at this time, choose flowers and sacred ceremony as our weapons? How could we stand for Beauty? How could we be powerful warriors of Love and Creation? This will take a change of heart.

Are you willing to take a stand like this? What would that look like? How can it be more than an airy fantasy? Can we have a conversation about this new dream? I think our very lives depend on it.