Some families appear to be elected, even ordained, to teach the rest of us about loss and suffering, and about the love and resilience that helps us bear the unbearable.

I met one of these families this week during an emotional reunion of the 3 Marine squadrons where Lt. William Ryan served in Viet Nam. My husband, Jon Trachta, served in one of these squadrons, so I went with him to Washington, D.C. for three days of events.

The keystone event was the funeral with full honors at Arlington National Cemetery on May 10, 48 years after Lt. Ryan died on a mission in Laos. His remains were found and identified in January, allowing the family to plan for this event, called “Bringing Billy Home.” 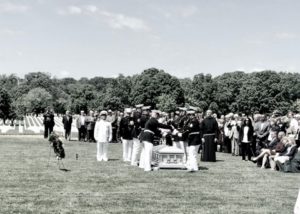 Hundreds of mourners gathered on a hillside where a caisson led by 7 white horses received the flag-draped coffin. Ospreys flew over in the missing man formation, where one peels off and the rest continue. The family walked behind the caisson, followed by a procession of Ryan’s Marine brothers and the hundreds of family friends in attendance. (Arlington officials claimed it was the largest funeral there in memory.) It was hard to say which was more heart breaking: the family, the crowd, the ceremony, or my husband’s tears.

At the funeral site, Marines lifted the flag and folded it in slow motion. A Brigadier General carried it over to Ryan’s son, Mike, handing it to him and expressing condolences to his wife and children.

The full tragedy was that Mike’s mother, Judy, had been buried the day before—May 9. Literally the day after finding out that her first husband’s remains had been identified, she was diagnosed with stage 4 colon cancer on January 17. She died April 11.This was after losing her second husband in March– the only father Mike remembered. For Mike, this string of losses is simply incomprehensible.

Gary Bain, the pilot who flew with Ryan, his backseater, knelt at the coffin and placed the patch from his flight jacket on top of the flowers. Gary, who spoke later at a dinner for the 46 fellow Marines who travelled to the event, admits to having struggled mightily with survivor’s guilt. He still does not know why, after agreeing they would eject, Ryan’s ejection seat was not freed. Hopefully Gary’s struggle has come full circle, and he has now been brought “home” as well.

As Jon and I watch video and photos, we are both moved by so many aspects of our journey. Of course the beauty of the ceremony and the reunion is bittersweet, overshadowed by the tragedy of war that brought us all together in the first place.

Jon has taught me that the bravery he exhibited in the 240 missions he flew was motivated by brotherhood. The mystique of the Marines has less to do with God and country than with being willing to die for another human who is your brother—or now, your sister. 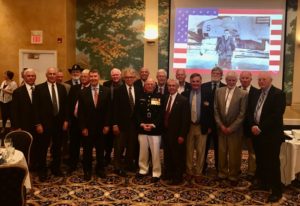 I’ve not had to risk my life in war, and so I understand that I don’t understand. There is probably no way I can really know what these men have all been through and what it means in the secret chambers of their hearts. But one thing is clear: “Semper fidelis” has to do with love.

I imagine that’s what also motivated my own father, a bomber pilot who was shot down and killed in World War II when I was 21 months old. He flew the plane down while everyone else got out except his bombardier, who was trapped beneath the cockpit. His mother and my mother waited in anguish for four months of his being missing, until one of the survivors wrote my mother and told her he counted the chutes and saw the plane explode. So I do know something about how families are affected.

And so I’m left with the prayer that the love I witnessed last week continues, and that the beauty of the honor and ritual and ceremony continues. May we find a way as a species to love and honor each other without having to resort to war. In the same way that Mike and his family will find the resilience to live and love beyond their losses, may we find a way to recover from battling each other and find the beauty and honor encoded in every life.

If it’s true that “home is where the heart is,” then may all warriors and their families find their way home.

This post is also on HuffPost and can be seen at http://www.huffingtonpost.com/entry/5918f315e4b00ccaae9ea459.