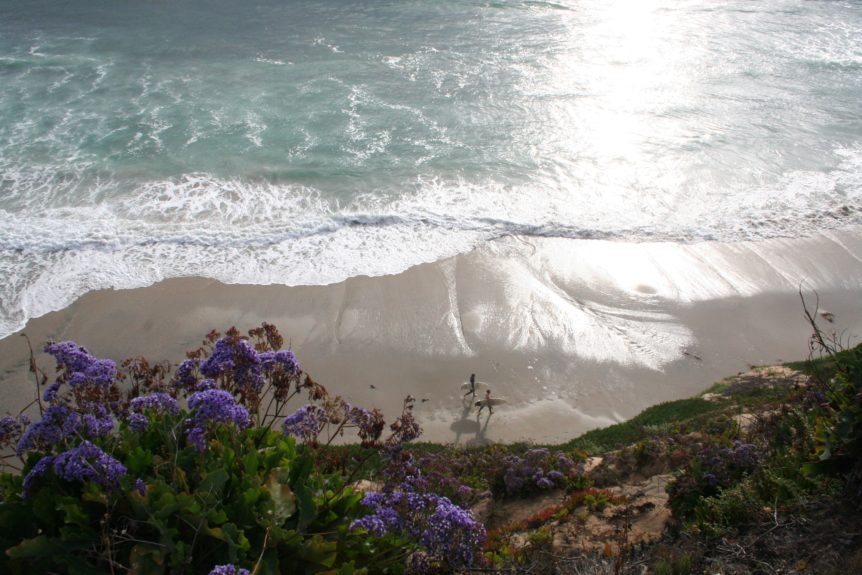 When my breasts were just buds, my Dad taught me how to be a surfer girl. I grew up in Southern California, and we spent our family vacations at San Clemente, camping every day by the Trestle, still a well-known surfing spot. We’d set up an umbrella, get out the Coppertone oil (yep, I had the darkest tan in town) and buy the best cheeseburgers in the universe at the stand on the beach. Every year I’d push the envelope a bit more.

At first I was only allowed to wade into chest-high surf. I could enjoy that, because the angle of the ocean floor is very shallow there, making series of waves. I would ride the little waves on my canvas mat (pre-boogie boards), while my Dad would venture out to the men-only spot way out where the big waves break.

Already, you can see there are metaphors coming (and you may know, I love ‘em.) My Dad was teaching me how to venture into men-only territory in the world of my future. What he didn’t know is that he was also a spiritual teacher. Today I’m in my 70’s, and I’m more amazed than ever at how big the surf is, even in Arizona. The world seems almost consumed by huge waves of change, and I feel more out of control than ever. Maybe I can’t make waves the way I once thought I could. These days it’s enough to just surf them.

So here are some surfing principles my Dad taught me that you could adopt for navigating turbulent times:

Comment: If this metaphor works, it means trying to “Go deeper” instead of “Rise above it.”

2. Wait for the right wave for you to ride. Don’t start with a giant one, or even assume those are the best. Don’t crowd in front of someone already riding the wave. Pick the one that just beckons.

Comment: Guess this falls under the category of picking your battles–and your thrills!

3.  If you get caught in a riptide, don’t fight it. Be observant and try swimming parallel to the beach until you can catch a wave that will take you to shore.

Comment: Of course you’ll run into unseen forces that are big and dangerous, so be alert and stay calm and humble.

4. When you want to catch a wave, paddle like hell. You have to work for your thrill. Now let the ave carry you. See how you can work with it. What can you do to increase your still and your fun?

Comment: What if life is all about putting everything into the present moment?

5. Respect the ocean. It’s much larger than you are. It can be loads of fun and beautiful, and it can also kill you.

How these principles worked was: Dad would take me out to the zone of big waves where I couldn’t touch. When the right wave came, he would give me a big push on my canvas mat, and off I’d go, paddling like hell until the wave took me. It was a great ride all the way in to the beach. In later years, I’d use fins to catch my own wave and then get up on my knees on the mat once the wave broke, tall and strong in my pink-striped one piece. Not hot, not cool, just me.

Thanks, Dad, for the mentoring. Even though I never made it onto a surfboard, all these years later I can still taste the salt air.