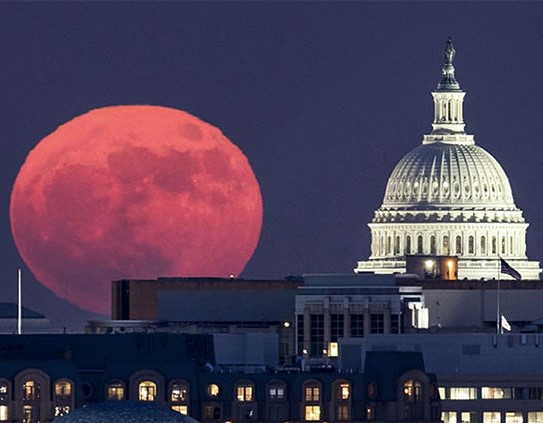 While the super moon was rising over the mountain above our house last Sunday, it also rose large and colorful over the Capitol. Can’t resist seeing the metaphor.

The moon is usually connected to all that is feminine. And the feminine is definitely rising over the Capitol—in a large and colorful way.

Of course the obvious way the feminine is rising is the #metoo movement and the way women are speaking out loudly enough to be the people of the year on Time’s cover.  As painful as the process is of leaders having to resign, most women and many men would agree that this is necessary. It’s about time that people are insisting that half the humans on the earth be honored and not desecrated.

The less obvious way that the feminine is rising is the way in which these times call for the feminine energy in all people to be honored equally and not desecrated. That feminine energy is usually associated with the gentler, more compassionate, more caring qualities of the heart—as opposed to the strategic, dominating, action-oriented energy that has been predominant for too long.

Compassion , gentleness and matters of the heart are being honored by the Australian government’s vote to honor same sex marriages; love trumps old traditional definitions. And, these qualities are also being trampled in hundreds of ways by the political decisions being made faster than you can say destruction.

So don’t make the mistake of thinking feminine energy is all sweetness and light. The feminine is on the move and will not be stopped.

Take Mother Earth, for example. Wildfires, epic winds, heat waves overtaken by sudden freezes. The threat of earthquakes. Volcanoes. Species disappearing. Glaciers disappearing.We are reminded daily that we may have thought we were in charge, but our thinking has been faulty.

Of course indigenous people could easily say they told us so. The Hopi prophesies—and many other indigenous ones– are coming true. Will we pay attention? Hindus say we are in the time of the kali yuga , the destruction of the old and precursor of a new era. Native people say we are witnessing the destruction of the old world as it was, as a necessary cleansing before the creation of a new one.

There are a couple of ways to ride the waves that keep on breaking during this tumultuous time. The strategy of fighting the wave and grasping at the shore is time-honored, but has never worked very well. It’s easy to see who is doing this. It’s harder to understand why that grasping –and indeed doubling down on the old boy way seems to be working on many levels. But we’ll see what the consequences are. We’ll see who may rise up and say enough.

The moon rose up over “our” mountain surrounded by magical wispy clouds. We watched it by a blazing outdoor fire, celebrating its beauty. At the Capitol, I wonder if anyone noticed. Who wandered out onto a terrace to breathe in awe and wonder? Or are all eyes closed to the rise of the feminine?

Maya Angelou saw all this, and said, in her famous poem, I Rise:

Leaving behind nights of terror and fear

Into a daybreak that’s wondrously clear

I rise
Bringing the gifts that my ancestors gave,
I am the dream and the hope of the slave.
I rise
I rise
I rise.
This post also appeared on HuffPost at https://www.huffingtonpost.com/entry/the-rise-of-the-feminine_us_5a29eef9e4b04e0bc8f3b336
Feel Free to Share this Content!